An excerpt from The Healing Curve

On the last day of our trip, we all gathered into several cars to make our way to a hill where Papa would conduct a ceremony. I wasn’t sure what the purpose was or how I would feel afterwards. I only knew that it was one of many sacred ceremonies conducted by the Maori Shaman throughout the year. I think it was a cleansing for the community. I rode up with Eddie, sitting in the back seat of his car with my mother. As we drove along, I enjoyed the vibrant greens of the surrounding landscape. New Zealand is so beautiful and so different from America. In fact, it’s incomparable to any place I’ve been. When you go to Europe, the landscape is not all that different. Maybe they have more of one variety of trees and less of another, but New Zealand is like another planet. The trees and plants are totally different, and to me everything seemed so alive and exquisitely colorful. 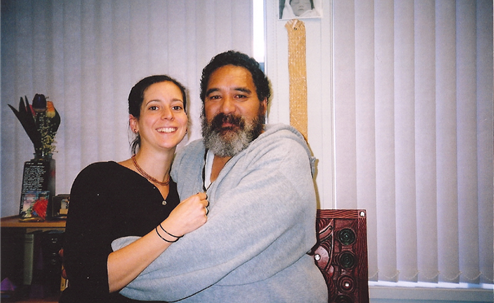 ​              When we got to the base of the hill everyone gathered around Papa and waited for his instructions. He told us to climb to the top, remove our shoes, and stand in two circles with the women in the middle facing towards the center and the men on the outside, their backs to the women. We did as were told and followed a path the rest of the way up the hill. From the top you could
see the surrounding country for miles. The day was bright and sunny. Everything was richly green and intensely alive. Even I could see that this was a quiet, but powerful place.

When we had formed our circles, Papa told us to join hands and close our eyes. Then the sounds began. They started as a soft hum; barely a word was formed. It was just the soft melodious vibration of a Shaman’s communication with nature; a primordial resonance that emanated from Papa and traveled deep into the earth. As his humming grew louder, the others began to join in. I tried to empty my head of thoughts and focus instead on the undulating pattern created by the voices surrounding me. The women started to chant slowly and steadily in Maori, leaving no silent spaces during the chanting, as if each person was responsible for filling in the silence with a voice. I listened and wished that I knew the chant. The men joined after the women had completed one cycle of song. It was a richer sound than the women produced, but the two pitches together were nicely balanced. I could hear Papa’s voice above the others. It was strong and sure, and I felt supported by it and by the community and the hand-holding and the weaving together of everyone’s voices.

Suddenly, the light grew darker and I stealthily opened my eyes to see what had happened. As I did, I felt the first raindrop land on my shoulder, and then we were all drenched. The rain was falling in thick sheets and I had to close my eyes again. I wondered if the sudden storm was part of the ceremony. Did Papa call the rain? The wind whipped around the top of the hill in a chaotic dance, and I imagined all of our shoes flying away on the strong air currents.

Everyone continued to chant, and the feeling behind the words was even more intense with the unexpected weather. My mom was standing to my right, and she squeezed my hand as the rain fell harder. I squeezed back and lifted my head so the rain could fall more directly on my face. This whole ceremony was designed to strengthen the community. I wondered if that had an impact on their daily lives. The women standing in the center of the circle clearly played a central role in the sustenance and survival of the whole. The men faced outward, communicating more directly with the outer world and protecting the sacred center. Were relationships structured in this way too? I liked this idea and wished that I wasn’t so narrow-minded and principled.

The rain was still falling heavily when Papa stopped singing and told everyone to gather their troubles, worries, and painful memories from the previous year and let them go. His voice thundered over the down-pour as he said, “Let the rain purify you. Make the decision now to drop these burdens. Let them soak into the earth; the rain will cleanse her of your negative beliefs.”
As the ceremony came to an end, the clouds began to separate and the countryside was bright and sunny once more. We followed the path down the hill and back to our cars. I knew these were the last moments I had with Papa, as we were heading to the airport directly from there. I wanted to express all of my gratitude for the amazing work and the wonderful way in which he and his students welcomed us into their community. Instead, I just started crying and gave everyone a big hug. I watched with tears streaming down my face as Papa got into a car. He smiled warmly through the window and waved as they drove away.

To read more or to purchase The Healing Curve  on Amazon.com ​please click here.